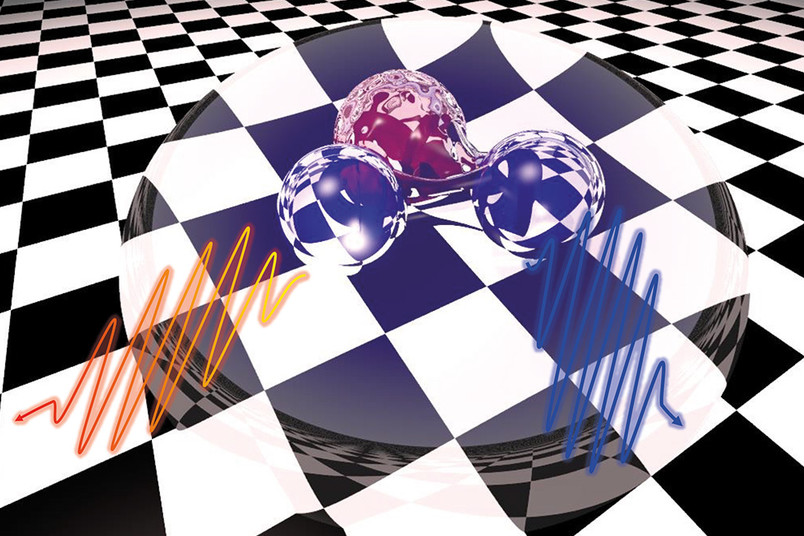 Researchers have stimulated a seemingly unattainable energy transitionInside inside a quantum dot, i.e. a tiny structure within a semiconductor.
© RUB, Arne Ludwig
Physics

Researchers have managed to address an unusual energy transition in a semiconductor.

Researchers from Basel and Bochum have succeeded in addressing an apparently unattainable energy transition in an artificial atom using laser light. Making use of the so-called radiative Auger process, they were the first team to specifically excite it. In this process, an electron falls from a higher to a lower energy level and, as a result, emits its energy partly in the form of light and partly by transferring it to another electron. The artificial atoms are narrowly defined areas in semiconductors that could one day form the basis for quantum communication. The findings are described by the team from the University of Basel and Ruhr-Universität Bochum together with colleagues from Münster and Wroclaw in “Nature Communications”, published online on 12 November 2021.

If an electron acquires energy, for example by absorbing a light particle, i.e. photon, it can be raised to a higher energy level. If an electron falls to a lower energy level, energy is released. This energy can be emitted in the form of a photon. But it can also be transferred to one of the other electrons; in this case, only some of the energy is released as light, the rest is absorbed by the other electron. This process is known as the radiative Auger process.

By irradiating light particles, electrons can not only be lifted to a higher energy level; they can also be stimulated to give off energy by an incident light particle. The energy of the incident light particle must always correspond exactly to the difference in the two energy levels between which the electron is to be transferred. The researchers have used two lasers: one moved electrons between a low and a high energy level; the other between the high and a medium energy level. This middle energy level corresponds to a non-equilibrium level: the transfer to the middle level doesn’t exist without a radiative Auger process. In addition, a transition between the low and the medium energy level shouldn’t have occurred, because the relevant light was not irradiated. However, precisely this seemingly impossible transition occurred in reality due to the energy transfer from one electron to another in the radiative Auger process. 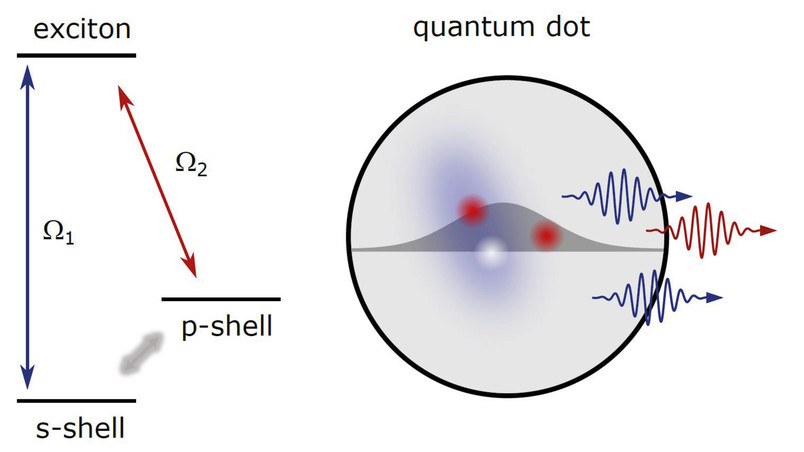 Using laser light, researchers have stimulated two energy transitions (blue and red arrows). They showed for the first time that it is possible to stimulate the so-called radiative Auger transition (red arrow). This effectively causes a transition between the two ground states (grey arrow). The experiments were carried out in a quantum dot – a tiny space within a semiconductor, in which single particles can be confined.
© Matthias Löbl, Clemens Spinnler, Universität Basel

The ultrapure semiconductor samples for the experiment were produced by Dr. Julian Ritzmann at Ruhr-Universität Bochum under the supervision of Dr. Arne Ludwig at the Chair for Applied Solid State Physics headed by Professor Andreas Wieck. The measurements were carried out by a team from the University of Basel run by Clemens Spinnler, Liang Zhai, Giang Nguyen and Dr. Matthias Löbl in the group headed by Professor Richard Warburton.

The project was funded by the Swiss National Science Foundation (project no. 200020_175748), the National Centre of Competence in Research “Quantum Science and Technology” (NCCR QSIT) as well as by the European Union as part of its Horizon 2020 programme (FET-Open-Projekt QLUSTER and grant numbers 721394/4PHOTON, 861097/QUDOT-TECH, 840453/HiFig and 861097). Additional funding was supplied by the German Research Foundation (DFH/UFA CDFA05-06, Collaborative Research Centre TRR160 and project no. 383065199) and the Federal Ministry of Education and Research (QR.X KIS6QK4001).

For information on sample production:

For information on measuring the energy transition: