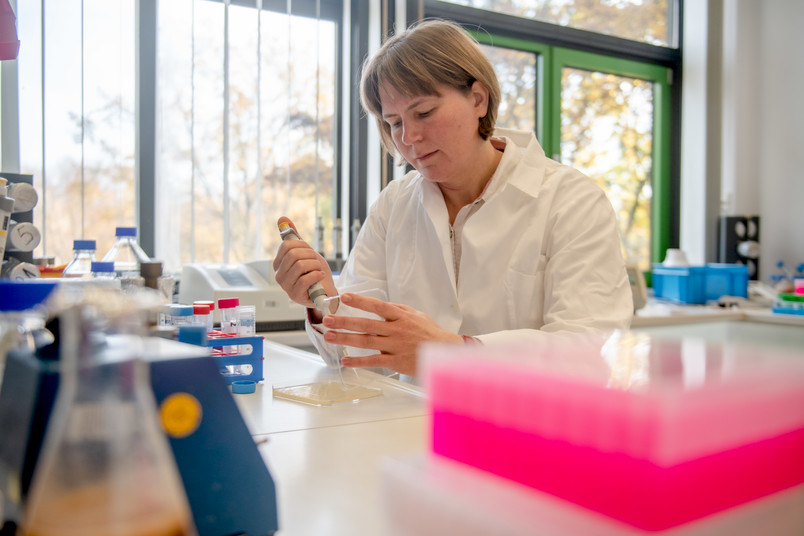 Julia Bandow and her team are in search of new antobiotics.
© RUB, Marquard
Biology

This is how the superbug Pseudomonas aeruginosa reacts to antibiotics

The bacterium is resistant to all antibiotics on the market. Therefore, there is a great need for new therapeutic approaches. In order to find them, it helps to understand how the germ reacts to active substances.

Researchers at Ruhr-Universität Bochum (RUB) have studied how different drugs affect the difficult-to-treat bacterium Pseudomonas aeruginosa. According to the World Health Organisation, new treatment options for the pathogen are urgently required, as some strains are already resistant to all currently approved antibiotics. The Bochum-based team headed by Professor Julia Bandow exposed P. aeruginosa to various substances and observed their effects on the protein make-up of the bacteria, also known as the proteome. The results enable the researchers to conclude what makes P. aeruginosa resistant; in addition, new approaches for treatment of the priority pathogen were investigated. Together with the group of Professor Pei Zhou from Duke University in the USA, the RUB team describes the analyses in “Antimicrobial Agents and Chemotherapy”, a journal of the American Society for Microbiology, published online on 8 November 2021.

Bacteria are often categorised as either Gram-positive or Gram-negative depending on how they react in a certain staining procedure, namely the Gram stain. “Infections with the Gram-negative pathogen Pseudomonas aeruginosa are feared as being difficult to treat,” says Julia Bandow, head of the Applied Microbiology research group at RUB. Patients can become infected with the germ in hospitals, for example; it causes pneumonia or sepsis, which can be fatal.

In the first step, the researchers investigated why P. aeruginosa is resistant to so many common antibiotics. They treated the germ with twelve different approved antibiotics and documented the resulting changes in the proteome. This allowed them to deduce how the cells defend themselves against the antibiotics. The team also divided the individual substances into groups based on how similar the triggered effects were. This correlated with similarities in the compounds’ modes of action.

Furthermore, the scientists tested the experimental substance CHIR-090. Compared to the effects of approved antibiotics, CHIR-090 produced a unique proteome response. CHIR-090 blocks the production of sugar-lipid compounds addressing a target that has not yet been exploited clinically. No resistance to the drug has been observed in clinically relevant bacterial strains. “Resistance to new classes of substances is expected to emerge more slowly than to derivatives of conventional antibiotics,” explains Julia Bandow.

The Center for System-based Antibiotic Research is being established at RUB in cooperation with the Lead Discovery Center GmbH (Dortmund). It’s intended to facilitate the discovery of novel active substances and intensify networking of players from academia and industry, both regionally and internationally. Cesar is funded by the European Regional Development Fund and the German Federal State of NRW with around 4 million euros.

The study was partially funded by the state of North Rhine-Westphalia and the EU Commission as well as the e National Institutes of Health (USA, funding codes AI094475 and GM115355).