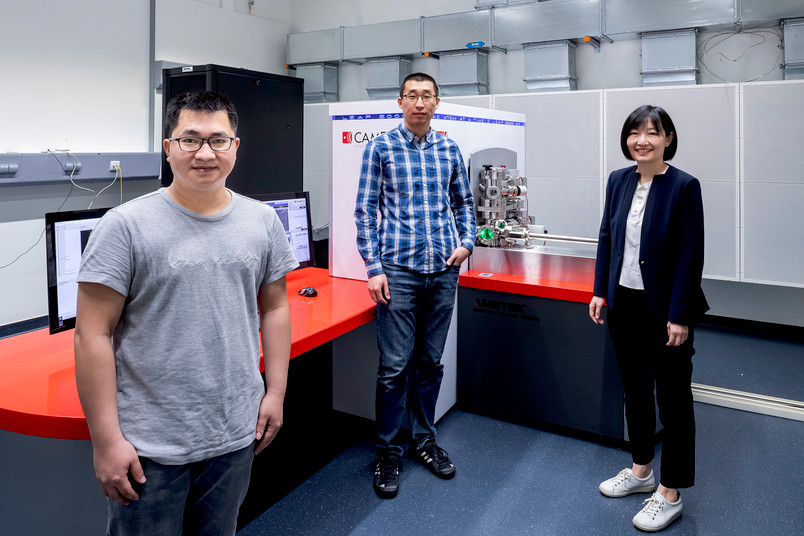 Members of the Bochum-based research team in the lab: Weikai Xiang, Chenglong Luan and Tong Li (from left to right)
© Privat
Materials science

Catalyst surfaces have rarely been imaged in such detail before. And yet, every single atom can play a decisive role in catalytic activity.

A German-Chinese research team has visualised the three-dimensional structure of the surface of catalyst nanoparticles at atomic resolution. This structure plays a decisive role in the activity and stability of the particles. The detailed insights were achieved with a combination of atom probe tomography, spectroscopy and electron microscopy. Nanoparticle catalysts can be used, for example, in the production of hydrogen for the chemical industry. To optimise the performance of future catalysts, it is essential to understand how it is affected by the three-dimensional structure.

Researchers from the Ruhr-Universität Bochum, the University of Duisburg-Essen and the Max Planck Institute for Chemical Energy Conversion in Mülheim an der Ruhr cooperated on the project as part of the Collaborative Research Centre “Heterogeneous oxidation catalysis in the liquid phase”.

At RUB, a team headed by Weikai Xiang and Professor Tong Li from Atomic-scale Characterisation worked together with the Chair of Electrochemistry and Nanoscale Materials and the Chair of Industrial Chemistry. Institutes in Shanghai, China, and Didcot, UK, were also involved. The team presents their findings in the journal Nature Communications, published online on 10 January 2022.

Particles observed during the catalysis process

The researchers studied two different types of nanoparticles made of cobalt iron oxide that were around ten nanometres. They analysed the particles during the catalysis of the so-called oxygen evolution reaction. This is a half reaction that occurs during water splitting for hydrogen production: hydrogen can be obtained by splitting water using electrical energy; hydrogen and oxygen are produced in the process. The bottleneck in the development of more efficient production processes is the partial reaction in which oxygen is formed, i.e. the oxygen evolution reaction. This reaction changes the catalyst surface that becomes inactive over time. The structural and compositional changes on the surface play a decisive role in the activity and stability of the electrocatalysts.

For small nanoparticles with a size around ten nanometres, achieving detailed information about what happens on the catalyst surface during the reaction remains a challenge. Using atom probe tomography, the group successfully visualised the distribution of the different types of atoms in the cobalt iron oxide catalysts in three dimensions. By combining it with other methods, they showed how the structure and composition of the surface changed during the catalysis process – and how this change affected the catalytic performance.

“Atom probe tomography has enormous potential to provide atomic insights into the compositional changes on the surface of catalyst nanoparticles during important catalytic reactions such as oxygen evolution reaction for hydrogen production or CO2 reduction,” concludes Tong Li.

The German Research Foundation funded the project under the project no. 407513992 an under the umbrella of Collaborative Research Centre/Transregio 247 “Heterogeneous oxidation catalysis in the liquid phase” (project no. 388390466).