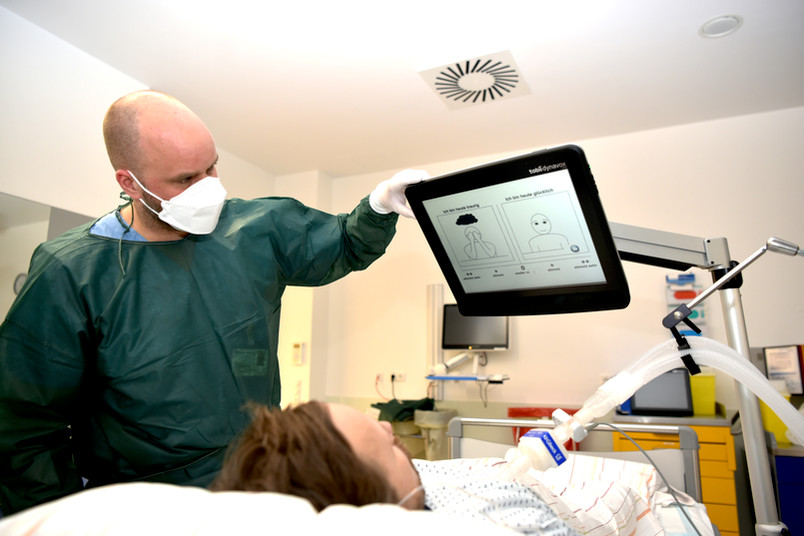 Communication by means of an eye-tracking system: The patient provides information about his or her condition by fixing a scale value with the eyes on the monitor for the respective question.
© BG Universitätsklinikum Bergmannsheil
Medicine

Intubated, ventilated, unable to speak: due to their condition, many critically ill patients are unable to express themselves. They can only communicate their wishes and needs, descriptions of symptoms, or pain sensations non-verbally. Eye-tracking systems can facilitate communication, in addition to eye-blinking, lip-reading and similar methods. This has been shown by a research group headed by the Department of General and Trauma Surgery of the BG University Hospital Bergmannsheil in cooperation with the Psychology Faculty at FernUniversität in Hagen. Their research also provides insights into the inner life of critically ill patients. The study, which received the International Paper Award 2021 of the “American Association for the Surgery of Trauma”, was published online in the Journal of Trauma and Acute Care Surgery on 14 December 2021.

Communicating without a voice

Being voiceless is a very frustrating experience for patients in intensive care – especially when they consider themselves to be sufficiently aware to communicate with those around them. Intensive care staff therefore often have to use alternative methods of non-verbal communication as part of their daily routine on the ward, to meet the needs of these patients. However, methods such as eye-blinking, lip-reading, head nodding, or the use of pen and paper or alphabet boards are often insufficient. In such cases, eye-tracking systems could be used to overcome communication barriers. 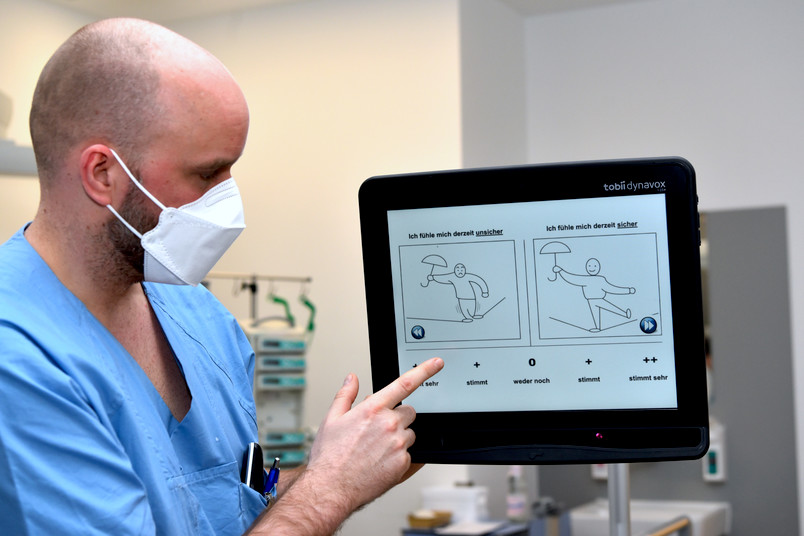 “Modern communication systems that are based on eye-tracking have long been established in the medical-therapeutic field, for example for people with advanced neuromuscular diseases,” explains Dr. Christopher Ull from the Department of General and Trauma Surgery of the BG University Hospital Bergmannsheil in Bochum (director: Professor Thomas Schildhauer). “However, their benefits as a suitable means of communication for critically ill intensive care patients who are unable to speak have hardly been researched as yet. Especially for ventilated patients who, for example, can’t use their arms and hands for communication due to tetraplegia, such a technology seemed very promising.”

The research group at the surgical intensive care unit headed by Professor Christian Waydhas, Dr. Uwe Hamsen, and Oliver Jansen included a total of 75 patients in their study. “Our study has proved to be highly informative and well-founded thanks to the interdisciplinary interaction with representatives of various professions at Bergmannsheil and our project partners Christina Weckwerth and Professor Robert Gaschler from the Faculty of Psychology in Hagen,” points out Schildhauer.

How a computer learns to recognize the line of sight

For their study, the research group employed a commercially available eye-tracking system that was mounted on a mobile holder and positioned in the patient’s line of sight. The system consists of cameras, light sources, various image processing algorithms, and special software programs installed on a commercially available PC. The principle is as follows: light sources emit near-infrared light, which is reflected by the eyes of the person in question. The cameras record the person’s eye and the reflection pattern in it. The image processing algorithms find specific details of the eye and the reflection pattern. Based on the collated data, the system uses mathematical algorithms to calculate the direction of the person’s gaze on the computer monitor: in other words, the system knows where they are looking.

Before deployment, the system was calibrated individually for each participant. After a short training phase, the patients were then able to control the system by fixating their gaze. Established scales and scores were presented on the monitor in the standardized study protocol, allowing patients to assess their pain sensation, their mood, their quality of life, and their self-esteem.

Insights into the inner life of critically ill patients

The results showed that the participants were in pain and experienced negative moods, despite of supposedly adequate pain-relieving therapy and regular psychological interventions. The state of health was generally rated as poor. In terms of self-esteem, most patients reported feeling trapped or insecure, frustrated, and misunderstood. Despite their severe illness, many patients nevertheless considered themselves intelligent, clear-thinking, sociable, and optimistic.

Opening up new ways of communication

“The results produced by our research group show two things: firstly, that eye-tracking system can enable critically ill, non-verbal and movement-impaired people to communicate their self-assessment and feelings to their environment in a nuanced way using standardized scales and scores,” says Christopher Ull. “Secondly, we identified indications for improvement measures in the provision of intensive care for verbally impaired patients through the use of eye-tracking technology. We are convinced that this technology can improve the interaction between patients and their intensive care team until they gain adequate ability to communicate non-verbally or to speak. However, further research is imperative for this to happen.”

The BG University Hospital Bergmannsheil is one of the largest primary care hospitals in the Ruhr region. Founded in 1890 as the world’s first accident and emergency hospital for the treatment of injured miners, the Bergmannsheil today accommodates 23 highly specialized clinics and departments under one roof. Around 2,200 employees provide qualified care for around 84,000 patients per year.

BG Universitätsklinikum Bergmannsheil is part of the BG Kliniken group. BG Kliniken specializes in the acute care and rehabilitation of people suffering from serious injuries and occupational diseases. At 13 locations, over 14,000 employees treat more than 560,000 cases per year. The BG clinics are run by the employers’ liability insurance associations and accident insurance funds.