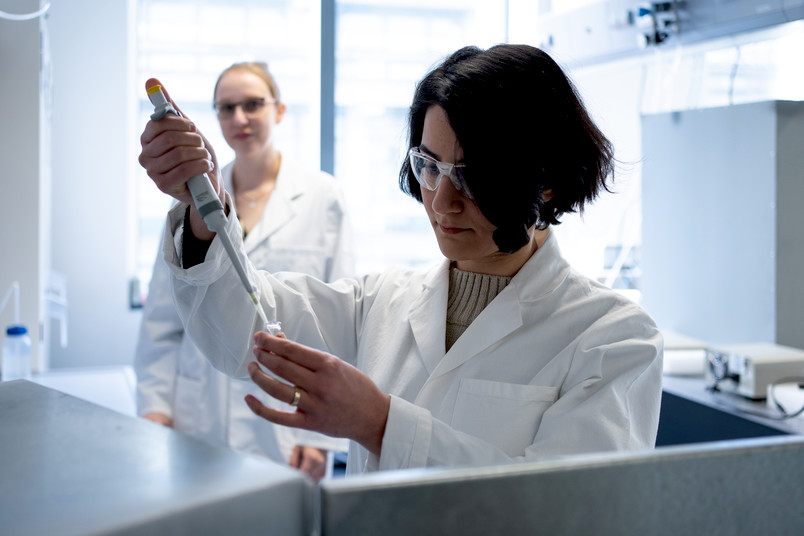 A new method can measure the electrical (re-)charging of boundary layers between very small, metallic particles and aqueous solutions and understand it at a molecular level.

Researchers from the RESOLV Cluster of Excellence at Ruhr-Universität Bochum (RUB) have used current and voltage measurements on individual nanoparticles to determine that the capacitively stored charge at platinum interfaces can be significantly higher than previously assumed. They attribute this to a special arrangement and bonding of water molecules. To this end, the international team led by Professor Kristina Tschulik, whose ideas were awarded an "ERC Starting Grant" by the European Research Council in 2020, cooperated with partners from France and Israel. The authors describe their findings in the journal "Angewandte Chemie International Edition" - online, published December 19th, 2021.

Although interfaces between metals and water are the local areas where crucial processes of energy technologies such as water splitting occur, comparably little is known about their structure and changes during such processes. For more than 100 years, the scientific description of such interfaces has been based on the model of the so-called electrochemical double layer. It states that charge carriers in an aqueous solution are increasingly arranged in the boundary region to the metal, to compensate for excess electrical charges on the metal side. In the process, the opposing charges are separated by water molecules. Similar to a standard plate capacitor, this nanoscopic charge separation in the interface allows energy to be stored and released later. Processes in which the molecular structure of the electrochemical double layer changes are relevant to many green technologies, such as supercapacitors and fuel cells.

Thousands of times smaller than the diameter of a human hair

Nanoparticles, which are thousands of times smaller than the diameter of a human hair, are investigated for such technical applications. Due to their advantageous ratio of process-relevant surface area to volume, they offer particularly good conditions for this. "In order to track down the capacitance and the rearrangement processes in the electrochemical double layer on platinum and gold nanoparticles, it was crucial to develop a method with which precise discharge currents can be measured on individual nanoparticles in solution," reports Kristina Tschulik. Otherwise, it would not be possible to distinguish effects related to the electrochemical double layer from effects caused by the interaction of neighbouring nanoparticles, since billions of them are present on a conventional electrode.

The Iranian scientist Dr. Mahnaz Azimzadeh Sani, who was funded by the German Academic Exchange Service (DAAD), used so-called colloidal nanoparticle dispersions. There, nanoparticles are separated from each other and finely dispersed in aqueous solution, randomly striking a biased microelectrode every now and then. With the help of computer-aided molecular dynamics simulations, on which researchers from the RUB and the Université Paris-Saclay and Sorbonne Université in Paris worked, it was possible to interpret similarities and differences in voltage-dependent measured capacitive currents of different types of nanoparticle dispersions. The measured unexpectedly high capacitances, are attributed to the increased accumulate of dissolved ions in regions between a compact water layer bound to platinum (and less trongl to gold) and an adjacent water layer of a different arrangement. "Furthermore, water molecules are detached from the metal surface when more negative voltage is applied" explains Dr. Julia Linnemann, team leader at Tschulik's chair. In the future, the RUB scientists want to find out whether and why the double layer structure is different on large electrodes consisting of many nanoparticles, in order to make the findings utilizable for commercial applications.