A sieve for molecules

Scientists have long tried to use graphene, which is composed of carbon, as a kind of sieve. But this material doesn’t have any pores. Now, a team has found an alternative material which comes with pores from the outset.

Researchers from Bielefeld, Bochum and Yale have succeeded in producing a layer of two-dimensional (2D) silicon dioxide. This material contains natural pores and can therefore be used like a sieve for molecules and ions. Scientists have been looking for such materials for a long time because they could for example help desalinate seawater and be used in new types of fuel cells. The team outlines the fabrication process of bilayer silicates in the journal Nano Letters, published online on 19 January 2022. The study was jointly conducted by the teams headed by Dr. Petr Dementyev from Bielefeld University, Professor Anjana Devi from Ruhr-Universität Bochum and Professor Eric Altman from Yale University.

When two-dimensional  materials are pierced with high precision, they can be used to filter out certain ions and molecules. Researchers have time and again tried to perforate the material graphene for this purpose, which consists of carbon atoms. Since it has no natural pores, they must be inserted artificially. But it is difficult to create holes of a defined size in graphene without permanently damaging the material. This is because it loses mechanical stability due to the perforation. Consequently, an alternative had to be found. In the current study, the research team took advantage of the fact that the crystal lattice of two-dimensional silicon dioxide contains pores by nature. They showed that these pores can be used to separate certain gases from each other.

“This is very exciting because 2D silicon dioxide has a very high density of tiny pores by nature that is simply not possible to be created in artificial membranes,” says Petr Dementyev from the Physics of Supramolecular Systems and Surfaces research group in Bielefeld. “Unlike in perforated graphene, the pores are all almost the same size. And there’s such an incredible number of them that the material behaves like a fine-mesh sieve for molecules.”

2D silica has been known since 2010. However, it was very expensive to manufacture, which could only be done on a small scale. Pooling together expertise from materials chemistry, chemical engineering and chemical physics, the researchers from Bochum, Bielefeld and Yale came up with a new material fabrication process. They used so-called atomic layer deposition to deposit a single layer of silicon dioxide on a gold surface. Using a high-pressure process, the researchers transferred the layer into its two-dimensional form and then characterised it in detail by means of spectroscopy and microscopy. They then examined the gas flow through the 2D membrane in a vacuum chamber. 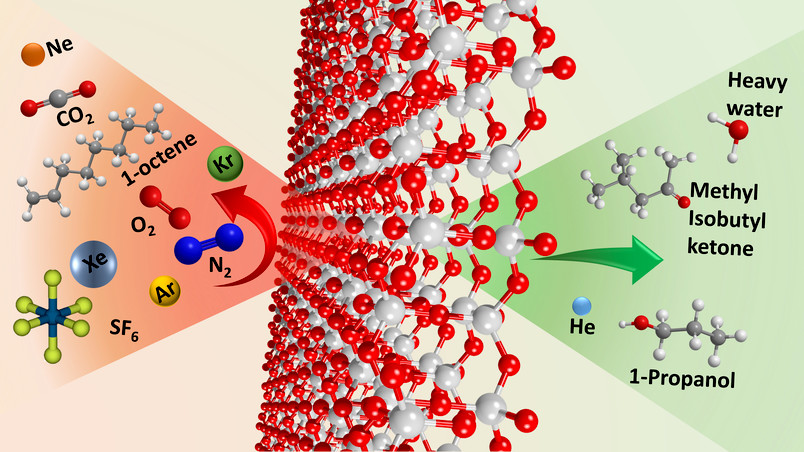 Two-dimensional silica has pores that are permeable to certain molecules (right), but not to others (left). It therefore acts like a sieve for molecules.
© RUB, AG Chemie Anorganischer Materialien

While vaporous water and alcohol penetrated the silica layer, the gases nitrogen and oxygen couldn’t pass through. “Materials like this with selective permeability are in high demand in industry,” says Anjana Devi. However, before the 2D silica can be used in practice, it is important to evaluate exactly how many different molecules can attach to the surface of the material or how they can penetrate it.

“We expect our results to be of high relevance to the materials science community worldwide,” concludes Anjana Devi from the Inorganic Materials Chemistry research group. Such 2D membranes could be at the forefront of aiding sustainable development, for example in the field of energy conversion or storage.”

The study was funded by Fonds der Chemischen Industrie.