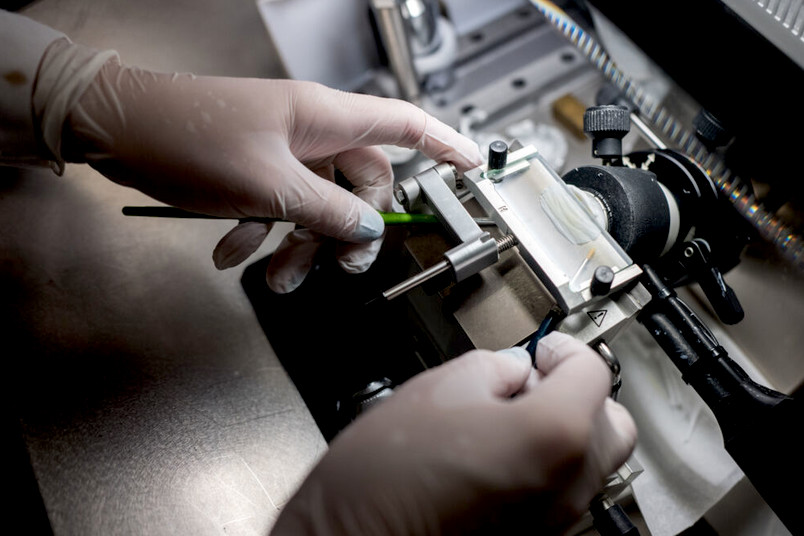 The researchers worked exclusively with archived tissues and specimens, including specimens that have been and continue to be used for decades for the education of students.
© RUB, Kramer
Developmental Neuroscience

Primates and non-primates differ in the architecture of their neurons

High-resolution microscopy now enabled an international research team to enlarge the knowledge about species-specific differences of  the architecture of cortical neurons.

Researchers from the research group Developmental Neurobiology at Ruhr-Universität Bochum around Professor Petra Wahle, in collaboration with partners from Mannheim and Jülich, Germany, and Linz, Austria, and La Laguna, Spain, have shown that primates and non-primates differ in an important aspect of their architecture: the origin of the axon which is the process responsible for the transmission of electrical signals called action potentials. Results are published 20 April 2022 in the Journal eLife.

Axons can emerge from dendrites

Until now, it was considered textbook knowledge that the axon always, with few exceptions, arises from the cell body of a neuron. However, it may also originate from dendrites, which serve to collect and integrate the incoming synaptic signals. This phenomenon has been termed “axon-carrying dendrites”.

The video shows a neuron (marked in green) of a macaque from which an axon (in red) arises from the dendrite. The cell nuclei can be seen in blue.
© Entwicklungsneurobiologie

“A unique aspect of the project is that the team worked with archived tissue and slide preparations, which included material that has been used for years to teach students,” explains Petra Wahle. In addition, a range of species was studied, including rodents (mouse, rat), ungulates (pig), carnivores (cat, ferret), and macaque and human of the zoological order primates. The use of five different staining methods and assessment of more than 34,000 neurons led the group to conclude that there is a species difference between non-primates and primates. Excitatory pyramidal neurons in particular of the outer layers II and III of the cerebral cortex of primates has clearly fewer axon-carrying dendrites than pyramidal neurons of non-primates. Further, quantitative differences in the proportion of axon-carrying dendrite cells were found within the species cat and human for inhibitory interneurons. No quantitative differences were observed when comparing in macaque cortical areas with primary sensory and higher brain functions. High-resolution microscopy was of particular importance, as Petra Wahle describes: “This allowed the detection of axonal origins accurately tracked at the micrometer level, which is sometimes not so easy with conventional light microscopy.”

Little is known on the function of axon-carrying dendrites. Usually, a neuron integrates excitatory inputs arriving at the dendrites with inhibitory inputs, a process termed somatodendritic integration. The neuron then decides if inputs are strong enough and important enough to be transmitted via action potentials to other neurons and brain areas. Axon-carrying dendrites are considered privileged because depolarizing inputs to these dendrites are able to evoke action potentials directly without involvement of somatic integration and somatic inhibition. Why this species difference has evolved, and the potential advantage it may have for the neocortical information processing in primates, is as yet unknown.