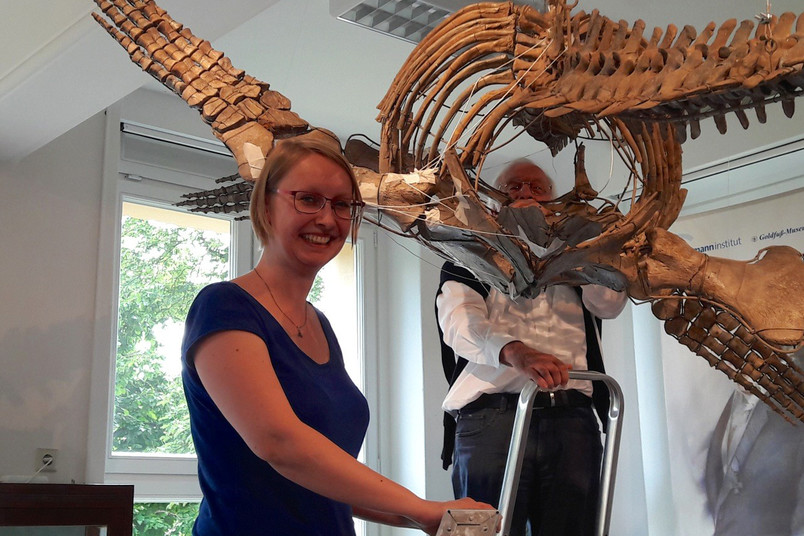 To reconstruct the muscles, Anna Krahl (front) and Ulrich Witzel used a model made from bone replicas and material from the hardware store. This analog model consists of molds of the fore- and hind flippers, wooden slats, chandelier clamps, eyelets and ropes.
© Privat
Paleontology

Plesiosaurs are characterized by four uniform flippers. It was possible to reconstruct whether they used these in a rowing or flying motion underwater thanks to a combination of paleontological and engineering methods.

Plesiosaurs, which lived about 210 million years ago, adapted to life underwater in a unique way: their front and hind legs evolved in the course of evolution to form four uniform, wing-like flippers. In her thesis supervised at Ruhr-Universität Bochum and the University of Bonn, Dr. Anna Krahl investigated how they used these to move through the water. Partly by using the finite element method, which is widely used in engineering, she was able to show that it was necessary to twist the flippers in order to travel forward. She was able to reconstruct the movement sequence using bones, models and reconstructions of the muscles. She reports her findings in the PeerJ magazine of 3 June 2022.

Plesiosaurs belong to a group of saurians called Sauropterygia, or paddle lizards, that re-adapted to living in the oceans. They evolved in the late Triassic 210 million years ago, lived at the same time as the dinosaurs, and became extinct at the end of the Cretaceous period. Plesiosaurs are characterized by an often extremely elongated neck with a small head – the elasmosaurs even have the longest neck of all vertebrates. But there were also large predatory forms with a rather short neck and huge skulls. In all plesiosaurs, the neck is attached to a teardrop-shaped, hydrodynamically well adapted body with a markedly shortened tail.

Researchers have puzzled for 120 years how plesiosaurs swam

The second feature that makes plesiosaurs so unusual are their four uniform wing-like flippers. “Having the front legs transformed into wing-like flippers is relatively common in evolution, for instance in sea turtles. Never again, however, did the hind legs evolve into an almost identical-looking airfoil-like wing,” explains Anna Krahl, whose doctoral thesis was supervised by Professor P. Martin Sander (Bonn) and Professor Ulrich Witzel (Bochum). Sea turtles and penguins, for example, have webbed feet. For more than 120 years, researchers in vertebrate paleontology have puzzled over how plesiosaurs might have swum with these four wings. Did they row like freshwater turtles or ducks? Did they fly underwater like sea turtles and penguins? Or did they combine underwater flight and rowing like modern-day sea lions or the pig-nosed turtle? It is also unclear whether the front and rear flippers were flapped in unison, in opposition, or out of phase.

Anna Krahl has been studying the body structure of plesiosaurs for several years. She examined the bones of the shoulder and pelvic girdle, the front and hind flippers, and the shoulder joint surfaces of the plesiosaur Cryptoclidus eurymerus from the Middle Jurassic period (about 160 million years ago) on a complete skeleton displayed in the Goldfuß Museum of the University of Bonn. Plesiosaurs have stiffened elbow, knee, hand, and ankle joints, but functioning shoulder, hip, and finger joints. “Analysis comparing them to modern-day sea turtles, and based on what is known about their swimming process, indicated that plesiosaurs were probably not able to rotate their flippers as much as would be necessary for rowing,” concludes Krahl, summarizing one of her preliminary papers. Rowing is primarily a back-and-forth motion that uses water resistance to move forward. The preferred direction of flipper movement in plesiosaurs, on the other hand, was up-and-down, as used by underwater fliers to generate propulsion. 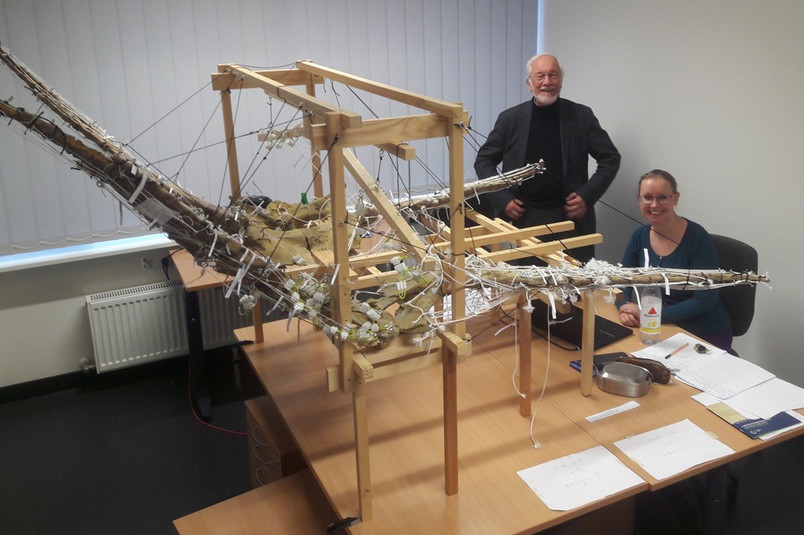 The muscles from the previous studies were strung in this model to better understand their geometry. The model also allowed flipper positions to be changed to measure how much muscles are lengthened or shortened.
© Privat

The question remained how plesiosaurs could ultimately twist their flippers to place them in a hydrodynamically favorable position and produce lift without rotating the upper arm and thigh around the longitudinal axis. “This could work by means of twisting the flippers around their long axis,” says Anna Krahl. “Other vertebrates, such as the leatherback turtle, have also been shown to use this movement to generate propulsion through lift.” Twisting, for example, involves bending the first finger far downward and the last finger far upward. The remaining fingers bridge these extreme positions so that the flipper tip is almost vertical without requiring any real rotation in the shoulder or wrist.

A reconstruction of the muscles of the fore- and hind flippers for Cryptoclidus using reptiles alive today showed that plesiosaurs could actively enable such flipper twisting. In addition to classical models, the researchers also made computer tomographies of the humerus and femur of Cryptoclidus and used them to create virtual 3D models. “These digital models were the basis for calculating the forces using a method we borrowed from engineering: the finite element method, or FE,” explains Anna Krahl. All the muscles and their angles of attachment on the humerus and femur were virtually reproduced in an FE computer program that can simulate physiological functional loads, for example on construction components but also on prostheses. Based on muscle force assumptions from a similar study on sea turtles, the team was able to calculate and visualize the loading on each bone.

Twisting of the flippers can be proven indirectly

During a movement cycle, the limb bones are loaded by compression, tension, bending and torsion. “The FE analyses showed that the humerus and femur in the flippers are functionally loaded mainly by compression and to a much lesser extent by tensile stress,” Anna Krahl explains. “This means that the plesiosaur built its bones by using as little material as necessary.” This natural state can only be maintained if the muscles that twist the flippers and the muscles that wrap around the bone are included. "We can therefore indirectly prove that plesiosaurs twisted their flippers in order to swim efficiently," Anna Krahl sums up.

The team was also able to calculate forces for the individual muscles that generated the upstroke and downstroke. For instance, it transpired that the downstroke of both pairs of flippers was more powerful than the upstroke. This is comparable to our sea turtles today and different from today's penguins, which move forward the same distance with the upstroke as with the downstroke. "Plesiosaurs adapted to life in water in a very different way than whales, for example," notes Anna Krahl, who now works at the Eberhard Karls University in Tübingen, Germany. "This unique path of evolution exemplifies the importance of paleontological research because it’s the only way we can appreciate the full range of what evolution can bring about."

The work was funded by the German Research Foundation, grant no: WI1389/8-1.