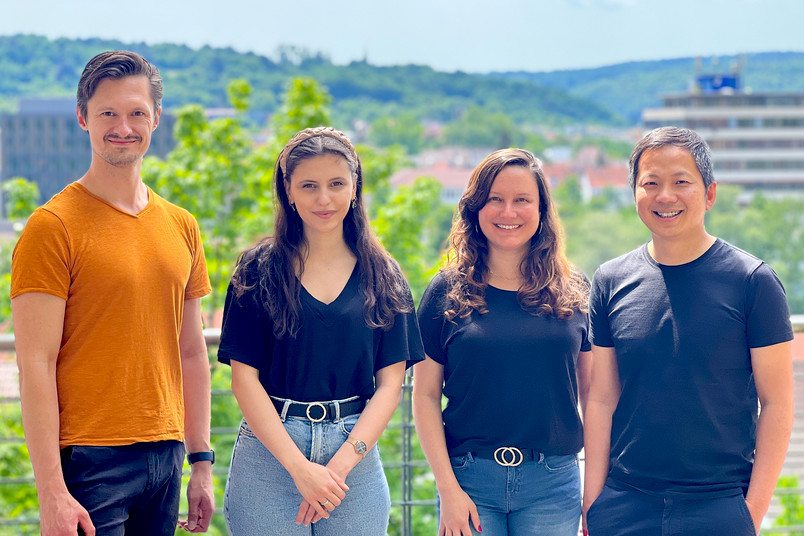 Calpains cut proteins into harmful fragments. The process can be stopped in a cell model.

Similar to Alzheimer’s disease, the hereditary disease spinocerebellar ataxia type 17 (SCA17) leads to the destruction of brain nerve cells and the premature death of patients. The exact mechanisms of this disease are unknown, which is why there are no treatment approaches as yet. Researchers from the Department of Human Genetics at Ruhr-Universität Bochum headed by Dr. Jonasz Weber now suspect that a class of protein-cleaving enzymes, so-called calpains, may play a role in the disease. By inactivating calpains, the researchers were able to halt the progression of the disease in a cell model. They published a report of their findings in the journal Cellular and Molecular Life Sciences on 28. April 2022.

Altered blueprint of a protein

Spinocerebellar ataxia type 17 (SCA17) is a rare, hereditary disease of the human brain. Due to the pathological alteration of a gene that contains the blueprint for a protein called TATA box binding protein (TBP), the protein is produced in cells in an abnormal conformation. As a result, its function is impaired. “One outcome of this is that the protein forms detectable protein deposits in the brain and damages the nerve cells via molecular mechanisms that have not yet been fully explored,” explains Jonasz Weber.

As a consequence, people affected by the disease develop symptoms starting in middle age, such as movement disorders, seizures, impaired mental performance as well as changes in character and behaviour, which are associated with a degradation of tissues such as the cerebellum and brain stem.

The molecular mechanisms that cause the disease are not yet fully understood. One candidate mechanism that may contribute to or at least affect the disease is the cleavage of the disease protein TBP by certain enzymes. This cleavage leads to even more harmful fragments of the TBP protein in the nerve cells. “It is worth noting that previous studies have shown that these cleavage products also occur in the tissue of Alzheimer’s patients, and that they could also play a role in the course of the disease there,” says Jonasz Weber.

The team from the Department of Human Genetics in Bochum, headed by Professor Huu Phuc Nguyen, has now proved that a special class of protein-cleaving enzymes, i.e. calpains, can cause this cleavage of TBP. “In addition, we demonstrated that these enzymes are overactivated in cell and animal models of SCA17,” says Jonasz Weber. Since calpain activity is calcium-dependent, this finding suggests that genes involved in controlling the calcium balance of cells may also be dysregulated.

By inhibiting the enzymes through pharmacological or genetic approaches, the researchers were able to reduce the deposition of TBP and the production of the defective protein in a cell model. “The proof that calpains are involved in the disease mechanism of SCA17 paves the way for further research,” points out Jonasz Weber. Follow-up studies should determine the relevance of this molecular process and establish whether and how it can be manipulated. As a result, therapeutic approaches for this disease could also emerge. “This applies to SCA17 as well as to similar neurodegenerative diseases, where it has already been demonstrated that calpains play a crucial role in the pathogenesis,” concludes the researcher.