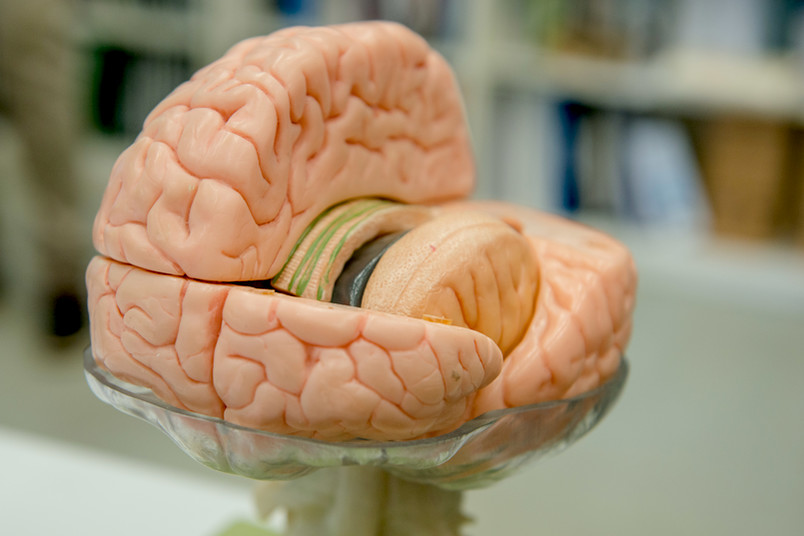 With the aid of computer models, Bochum researchers have gained new insights into the functioning of certain brain regions.
© RUB, Marquard
Brain research

Researchers have recreated the brain functions of mice and humans using computers. Artificial intelligences could learn from this.

The thalamus has long been considered a brain region primarily responsible for processing sensory stimuli. Recent studies have provided increasing evidence that it constitutes a central switch in cognitive processes. Neuroscience researchers led by Professor Burkhard Pleger in Collaborative Research Centre 874 at Ruhr-Universität Bochum and a team from the Massachusetts Institute of Technology (MIT, USA) observed learning processes in the brains of mice and humans and modelled them in mathematical models. They showed that the region of the mediodorsal nucleus in the thalamus plays a decisive role in cognitive flexibility. They published their findings in the journal PLOS Computational Biology on 12 September 2022.

The joint research of the German and US teams began with experimental observations of the brain during simple learning tasks. The German team had observed the brain activity of human test participants using functional magnetic resonance imaging while the test subjects had to feel two different stimuli in different sequences with their fingertips. They were then asked to predict the next stimulus in each case. Depending on how likely it was that one or the other stimulus would occur, this task was either easier or more difficult to learn.

The MIT team had mice complete a very similar learning task, not only observing their brain activity in the process, but later replicating it in the form of a mathematical model. “When we read the relevant paper, we immediately spotted the great similarity between the activation patterns in mice and humans,” points out Burkhard Pleger. Based on the work of their colleagues, the two research teams jointly extended the mathematical mouse model to include the human components. His team and the US team broke new ground with the current study: “Researchers who work with mice and ourselves who work with humans had to develop a common terminology first so that we could work together,” he explains.

Results are interesting for three reasons

When the researchers subsequently applied the mathematical model to the learning task from the experiment, it produced mostly the same results as the test participants. “There was almost 90 per cent correlation, which is very high,” says Pleger. A characteristic of the mathematical network model is that the region of the mediodorsal nucleus in the thalamus is in constant exchange with regions of the prefrontal cortex. “This proves once again the huge significance of the thalamus for cognitive processes,” stresses Burkhard Pleger. “This is of particular interest for three reasons: firstly, because cognitive flexibility is essential for survival. Secondly, because it’s at the centre of pathology in a great many psychiatric disorders. And last but not least, because we can mimic things that we can explain by means of mathematical models. Thus, we can draw conclusions about how artificial intelligences might learn.”