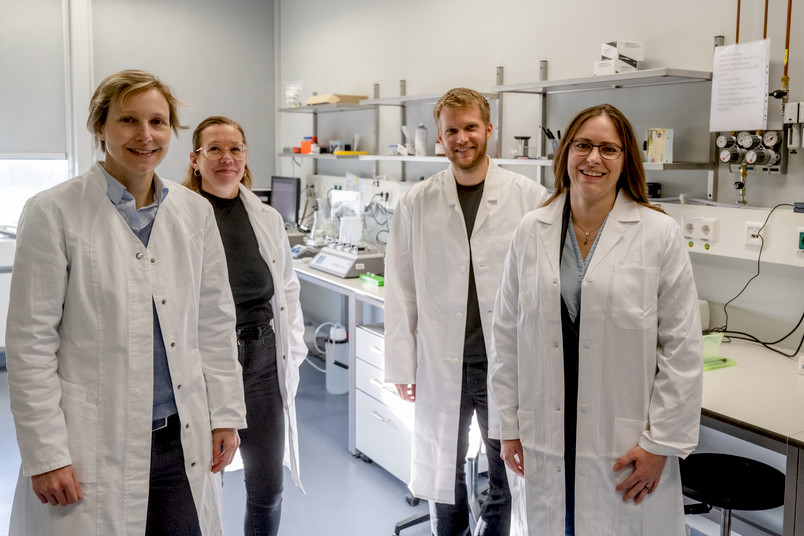 The body’s own cannabinoids widen the bronchial tubes

Bronchial constriction is what makes many lung diseases like asthma so dangerous. Researchers have discovered a new signalling pathway that causes the airways to widen.

Inhalation therapy for asthma and other obstructive lung diseases often loses its effect following prolonged use. A research team led by Professor Daniela Wenzel from the Department of Systems Physiology at Ruhr University Bochum, Germany, has now shown an alternative signalling pathway through which the body’s own cannabinoids cause the bronchial tubes to dilate. This gives rise to hope for alternative treatment options. Asthma is evidently also associated with a deficiency of these cannabinoids in the bronchial tubes, which could be one of the causes of the disease. The research team published its findings in the journal Nature Communications 17. November 2022.

Bronchial tubes dilated by the body’s own cannabinoids

Obstructive lung diseases are the third most common cause of death worldwide. They include chronic obstructive pulmonary disease (COPD), which affects many smokers, as well as bronchial asthma. During an asthma attack, the bronchial tubes contract so violently that it is no longer possible to exhale – and this can be life-threatening. “Asthma is an inflammatory process, but what is fatal is the constriction of the bronchial tubes,” explains Annika Simon, lead author of the study. “This is why we are very much interested in the regulation of this constriction.”

In a previous study, the researchers had likewise focused on the body’s own cannabinoid system, specifically on its effect in the blood vessels of the lungs. The best known endogenous cannabinoid is anandamide. “Since our results show that anandamide dilates the bronchial tubes, we wanted to understand the exact mechanism behind it,” explains Daniela Wenzel.

It quickly emerged that the two best-known receptors for anandamide (CB1 and CB2) are irrelevant for this regulation. Therefore, there must be an alternative signalling pathway through which the messenger substance anandamide acts on the bronchial tubes.

Daniela Wenzel and her team showed that this alternative pathway uses an enzyme called fatty acid amide hydrolase (FAAH). FAAH degrades anandamide, producing e.g. arachidonic acid, which in turn is converted to prostaglandin E2. “We know that prostaglandin E2 can dilate the bronchial tubes,” points out Annika Simon. Prostaglandin E2 acts via certain receptors and leads to an increase in the messenger substance cAMP (cyclic adenosine monophosphate). “It is precisely this, the increase in cAMP, that is targeted by well-established inhalation medications against asthma,” says Daniela Wenzel. So, the goal is the same, but the path is different.

Wenzel and her team gradually deciphered the signalling pathway. They revealed that the enzyme FAAH is located both in the smooth muscle of the bronchial tubes and in the ciliated epithelium. The increase in cAMP after anandamide administration could be detected both in the mouse model and in human bronchial cells. In order to find out whether anandamide could also works in asthma patients, the team used a disease model in mice where certain substances can be used to create artificial asthma. In these animals, too, the administration of anandamide led to a widening of the bronchial tubes. “This means that asthma doesn’t result in resistance to anandamide,” explains Daniela Wenzel. Moreover, the researchers found that asthmatic animals have less anandamide and other endocannabinoids in their bronchial system than healthy animals. “Therefore, it’s possible that this anandamide deficiency is one of the causes of bronchial asthma,” concludes Daniela Wenzel. 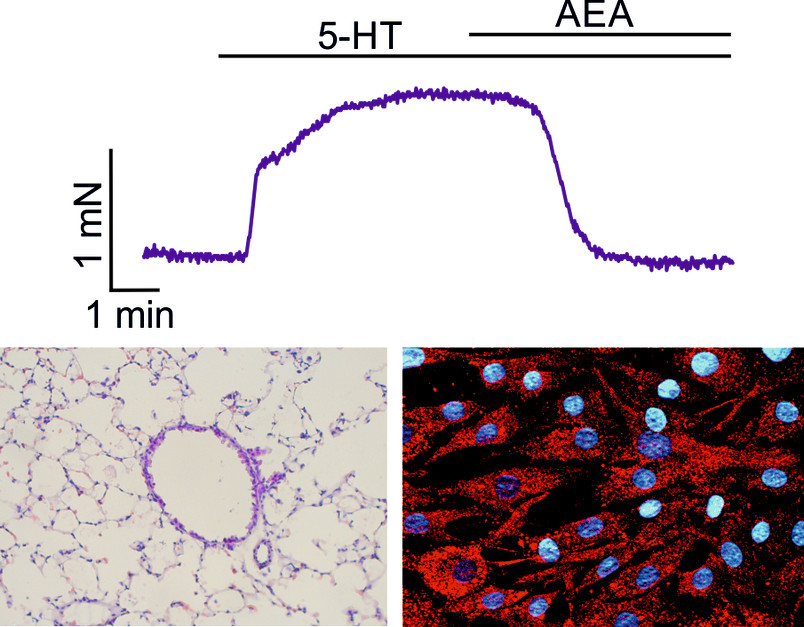 Above, the force measurements in the bronchi. After the administration of anandamide, the tension decreases. Below left, a histological section of a mouse lung with central bronchus and below right, human bronchial muscle cells with red immunostaining against FAAH, the cell nuclei are stained blue.
© Annika Simon

The discovery of the new signalling pathway could also open up new possibilities for intervening in the disease process. “But there’s still a long way to go, and it will certainly take several years,” stresses Daniela Wenzel. She expressly warns patients not to undertake experiments with cannabis plants. “We can’t draw any direct conclusions regarding plant cannabinoids from the findings on endogenous cannabinoids. Exactly which other ingredients are found in cannabis plants besides the known cannabinoids is entirely unclear. Plus, the plants sometimes contain harmful substances.” Nevertheless, the findings of this study are already pointing towards a better understanding of the body’s own cannabinoid system, which could lead to new treatment options for lung diseases in a few years’ time.

The study was funded by the German Research Foundation (funding code: WE4461/1-1).