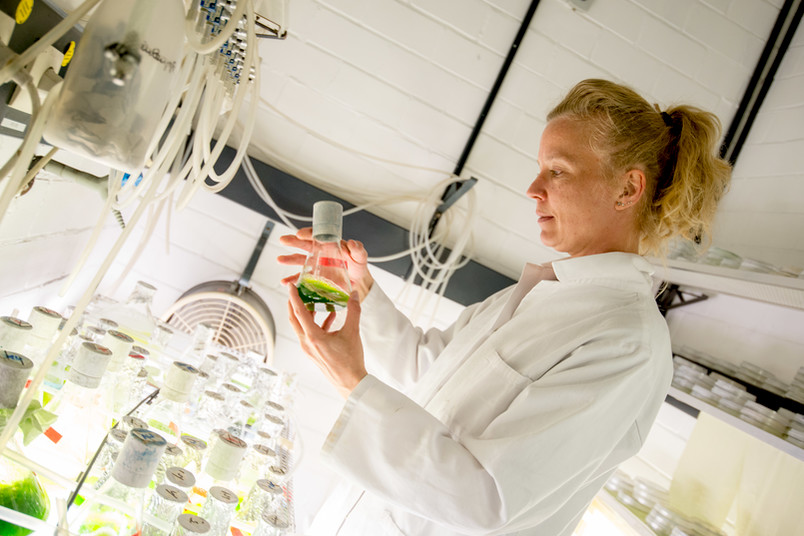 Old Yellow Enzymes have been known for almost 100 years, but their function in organisms has remained largely in the dark. A Bochum-based research team published first findings on microalgae.

Old Yellow Enzymes (OYEs) were discovered in the 1930s and have been the subject of much research ever since. This is because these biocatalysts – coloured yellow by an auxiliary molecule – are capable of performing reactions that are very valuable for the chemical industry, such as producing drug precursors or fragrances. Even though OYEs are found in many organisms, their natural role for these organisms has hardly been understood so far – possibly because the research focus has been on their biotechnological application. Researchers headed by Associate Professor Dr. Anja Hemschemeier and Professor Thomas Happe from Ruhr University Bochum, Germany, have now shown that an OYE of the unicellular green alga Chlamydomonas reinhardtii is vital for this plant microorganism to protect itself from photooxidative stress. The researchers published their findings in the journal “Plant Direct” on 15. January 2023.

OYEs in microalgae use energy from photosynthesis

“Our research group is among the first to investigate OYEs in algae,” says Dr Stefanie Böhmer, lead author of the study. “Initially, we set out to determine whether these biocatalysts are also suitable for industrial processes. We were particularly interested in whether microalgae can use the energy of photosynthesis to drive the respective chemical reactions. This could help establish more environmentally friendly productions.” The researchers could indeed demonstrate this: a chemical molecule added to living algae cells was only converted at high rates in the light. “This result also indicated that the so-called en-reductases of the algae that are responsible for this conversion are linked to photosynthesis,” says Böhmer. Therefore, the researchers from the Photobiotechnology working group investigated how an algal strain in which an OYE biocatalyst is defective adapts to strong light.

Excess light energy must be dissipated

In cooperation with researchers from the University of Leipzig, the Bochum research team could indeed show that this algal strain is hardly able to dissipate excess light energy. “Photosynthetic organisms such as algae and plants must always maintain a balance between absorbed light energy and its conversion into chemical energy,” explains Anja Hemschemeier, who led the study. “Otherwise, oxidative cell damage will occur if the light is too strong. Therefore, these organisms have sophisticated protective mechanisms in place to dissipate excess light energy, for example as heat.”

In the microalgal strain lacking an OYE, the researchers detected hardly any of these protective mechanisms at all, and the strain accordingly exhibited oxidative damage. “We suspect that a certain molecule, which is normally converted by this biocatalyst in the algal cells, is essential for the photosynthetic balance,” says Hemschemeier.

The research team now plans to get to the bottom of this. “Photosynthetic organisms provide the basis for our life. It’s very important to understand how they adapt to stress, and we believe we’ve found another piece of the jigsaw here,” concludes Hemschemeier.

The study was funded by the German Research Foundation as part of the Research Training Group MiCon, RTG 2341 and the German Academic Scholarship Foundation.