60,000 workers die on construction sites worldwide every year. This number could fall if a new idea by Bochum-based engineers proves to be of use.

I’m standing right in the middle of a construction site; beside me, a partially constructed building towers up into the sky. I take a few steps towards a pile of recycling material and effortlessly grab one of the bags that is full to the brim. I turn around to dump it into a nearby recycling station. Suddenly, while I am walking, a large wheel excavator appears behind the building, quickly approaching from the right as if the operator has not seen me. There is no opportunity to react.

But that does not matter, as all this is only happening in a virtual reality environment. The RUB researchers Thomas Hilfert, Prof Dr Markus König and Dr Jochen Teizer have granted the Rubin team a glimpse into one of their current projects, which intends to increase safety on construction sites. Through interactive training courses using virtual reality, they want to enable workers to experience hazards and thus sensitise them to them. To do this, they are creating virtual worlds of construction sites on a computer.

“There are many accidents on German construction sites every year. Often, construction equipment kills pedestrian workers or at least causes severe injuries,” says Markus König, head of the Institute for Computation in Engineering.

The safety standards in Germany are far from being as high as in the United Kingdom or the United States.

According to information from the German Federal Institute for Occupational Safety and Health, more than 100,000 work-related accidents were reported in the construction industry in 2014. This represents more than ten per cent of the total number across all industries. 78 of all accidents were fatal. “The safety standards in Germany are far from being as high as in the United Kingdom or the United States, for instance,” explains König.

The RUB team hopes to be able to provide occupational health and safety planners with a useful tool for accident prevention. The team from the Institute for Computation in Engineering have already been researching possible applications for virtual reality technology for six years. Construction site safety has also been a firm part of the research for a while now. 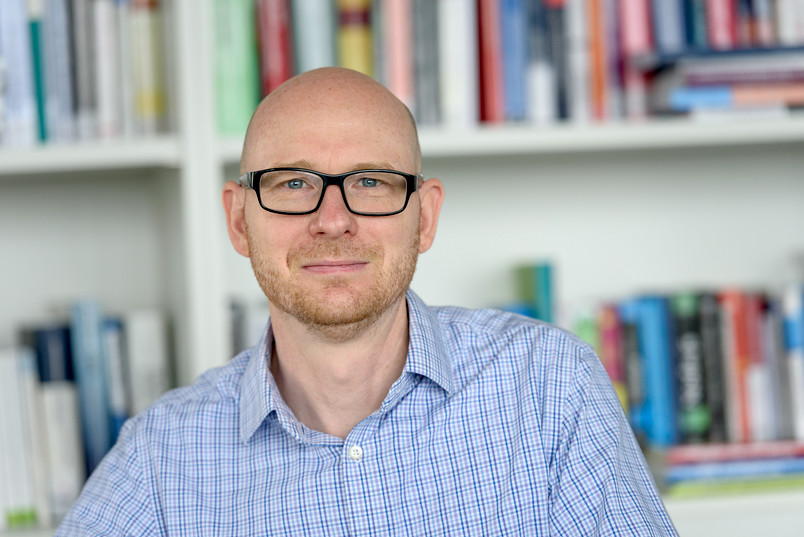 A virtual reality training course is intended to help users familiarise themselves with the areas and situations that are particularly hazardous. In fact, the training is designed after the exact same construction site on which the users will later be working on or for which they will be responsible as occupational health and safety personnel.

First construct virtually, then for real

The Bochum-based researchers are taking advantage of the fact that most large construction sites today are first planned virtually before they are build in reality. The team uses a three-dimensional model for designing a virtual environment.

To make the computer-generated construction site look somewhat true to real-life, they have to add surface textures, shadows and environmental information, such as houses, streets and trees. Construction machinery should also not be forgotten. The engineers can use sounds to make the virtual scenario seem even more realistic. 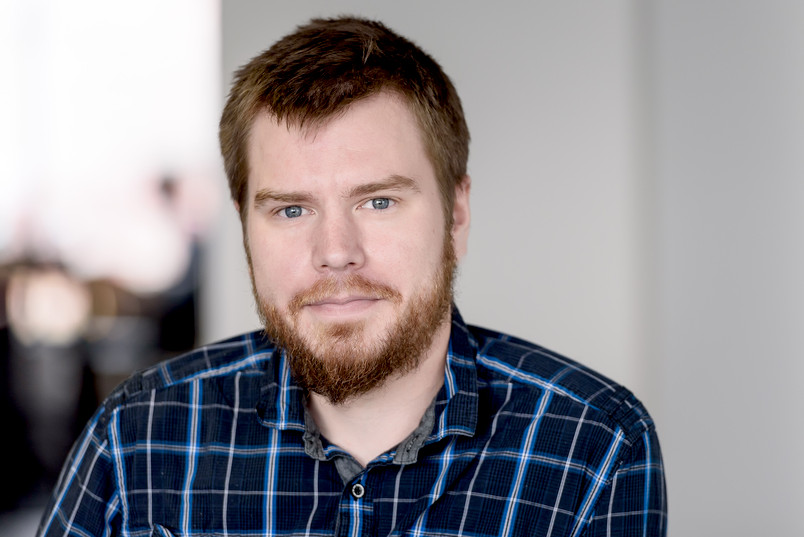 With a degree in applied information technology, Thomas Hilfert has the necessary know-how for creating virtual worlds.
© Roberto Schirdewahn

Thomas Hilfert looks at the programming of precisely these things in his doctoral thesis. With a degree in applied information technology, he possesses the optimal knowledge for this. He has already developed models of construction sites with various layouts, in which the virtual visitors can move around in rain, fog or sunshine.

To achieve this, he uses the same technology as found in computer games. Test subjects experience the virtual reality through special fully-enclosed goggles. Although they are walking in an empty room, they feel as though they are moving around a real construction site. With a control device in their hand similar to a remote control, they can interact with objects, such as by lifting sacks and carrying them to other places.

Making a virtual reality environment look realistic is a challenge when you don’t have a huge budget available.

“There is already a lot of software that enables you to upload certain elements into a virtual environment you have created yourself,” explains Markus König. “However, making it look as realistic as possible is a challenge when you don’t have a huge budget available.” Building a computer gaming world can easily cost tens of millions of euros. Spending such sums of money is unrealistic for academics and the building industry.

Thomas Hilfert is currently working on automating the processes he has developed. The aim: his program is expected to use the three-dimensional model of a construction site to automatically create a virtual reality representation in which the user can add construction equipment with typical motion sequences. Based on a modular concept, one could quickly put together a virtual construction site environment that suites one’s own needs.

The Bochum engineers primarily see occupational health and safety planners as the target group for their idea. They usually only have printed training materials or presentation slides available to them, occasionally a generalized film on safety. “It is like watching TV, lasting learning success tends to be low,” says Jochen Teizer, an internationally recognised safety expert for the construction industry. He is assisting Thomas Hilfert with his research work.

The cause of an accident is often not the misconduct of a single worker.

The RUB technology could be used to enable all those affected to familiarise themselves with the working conditions on the virtual construction site. The researchers expect that, in the future, all construction workers could be trained virtually, each according to the individual needs or work that is to be completed on the construction site. Planners could use the same virtual environment to localise and eliminate sources of danger in advance. In dangerous areas, they could, for instance, provide additional barriers to create pedestrian-only walking paths.

“The cause of an accident is often not the misconduct of a single worker,” says Teizer, “but rather a lack of a good safety culture within a company or inadequate planning or lack of sufficient resources for safe working conditions.”

An unlimited number of lives

Hilfert, König and Teizer want to evaluate how helpful the virtual construction site is over the course of the project. They have already ordered additional technology: an eye tracker, which can be integrated into the virtual reality glasses to track eye movements. This allows them to assess where people orient their attention to while they are moving through the computer world – in different weather conditions or when various safety and warning systems are active.

“As you have an unlimited number of lives in the virtual reality, we can observe very precisely how the test subjects react after fatal accidents and when learning effects come in,” explains Thomas Hilfert. 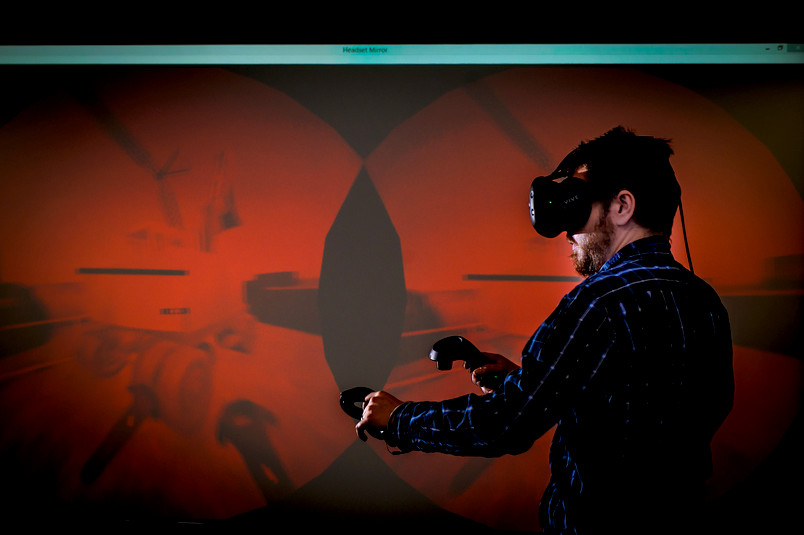 In the virtual world, people have an unlimited number of lives. A fact that RUB researchers want to exploit.
© Roberto Schirdewahn

Two American construction companies have already expressed interest in the technology that the Bochum-based engineers are developing. This comes as no surprise as accident victims in the United States can sometimes claim huge sums in compensation. “In one case recently, it was $56 million,” reports Teizer. “There is increased interest in our work in the German-speaking world as well,” he adds. This is because those responsible have recognised that beyond ethical reasons good occupational health and safety makes construction sites more productive and thus more profitable.

The RUB engineers are also already developing ideas for further projects on construction site safety. They want to try out special safety vests that light up and sound an alarm when a construction site vehicle is approaching the wearer. Based on wireless technology, Jochen Teizer has already undertaken the first promising experiments. 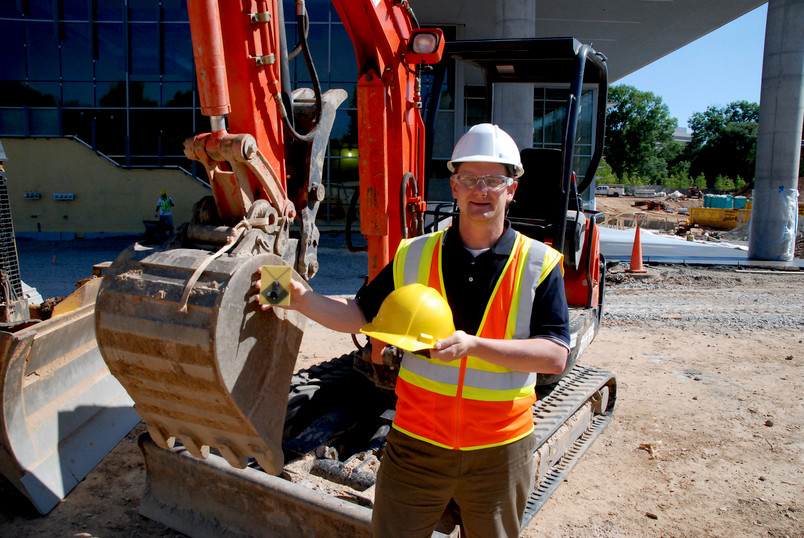 Such a system could then lead to even more safety if the precautionary measures derived from the virtual training course were not sufficient.