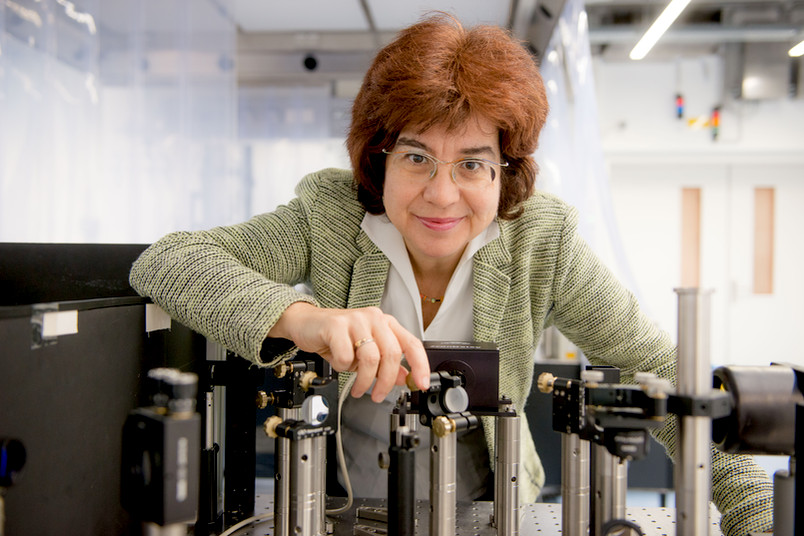 Martina Havenith has quickly implemented the first research idea, which she wanted to realise with funds from a prestigious grant from the European Research Council.
© RUB, Marquard
New method

In the first attempt, the chemists investigated alcohols using their new procedure. Later, they want to work on larger molecules. This could help when developing medications.

Chemists at RUB have developed a new method that allows them to map changes in the dynamics and structure of water molecules in the vicinity of solutes. With this technique, called terahertz calorimetry, they investigated the properties of the hydration shell of dissolved alcohol molecules. In the future, they want to also use the method for water mapping around more complex systems such as enzymes, which can be important for drug design.

Method can now be applied in real time

Fundamental biological processes such as enzymatic catalysis or molecular binding occur in aqueous phase. Calorimetry serves as a powerful biophysical tool to study the molecular recognition and stability of biomolecular systems by measuring changes in thermodynamic state variables, e.g. upon protein folding or association, for the purpose of deriving the heat transfer associated with these changes. Calorimetry determines, enthalpy and entropy, which are measures of the heat transfer and disorder in the system.

Calorimetry is restricted to timescales of 1 to 100 seconds. In contrast, spectroscopic processes, which are based on short laser pulses, are able to perform measurements on the time scale of a millionth or a billionth of a second. The Bochum-based chemists showed that both approaches are complimentary.

“By establishing a terahertz calorimeter in a proof of concept experiment, we have achieved the first aim that we had been working on using the Advanced Grant funds from the European Research Council,” explains Martina Havenith. In 2016, she was awarded the grant endowed with 2.5 million euros.

The results were published by Prof Dr Martina Havenith, chair for Physical Chemistry II and spokeswoman for the cluster of excellence Resolv, with Dr Fabian Böhm and Dr Gerhard Schwaab in the journal “Angewandte Chemie”.