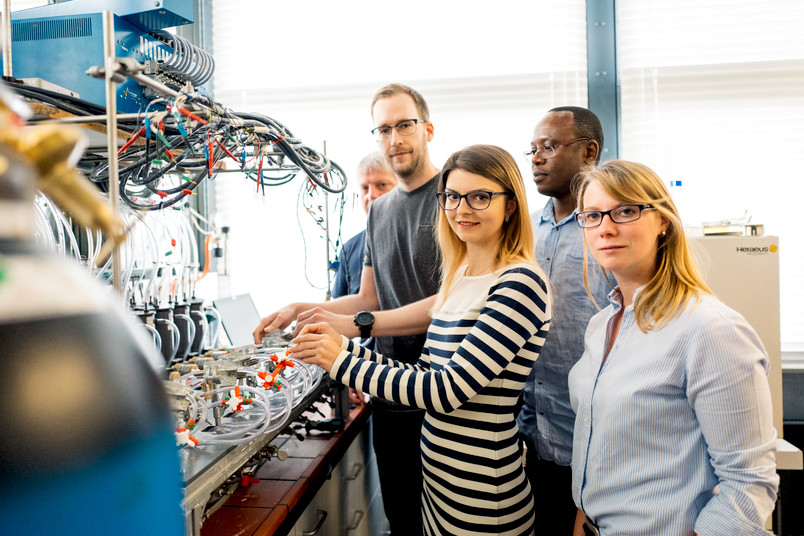 The new method developed by Corina Andronescu (centre) and Stefan Barwe (to the left of her) together with their colleagues, is potentially interesting for the electrochemical hydrogen production.
© RUB, Kramer
Chemistry

Catalysts stay on the electrode surface

The method developed by chemists from Bochum is as easy as varnishing a car door. It could make new catalysts operational in the industry.

RUB-chemists have invented a new method to tightly fix powder-based catalysts on electrode surfaces. This type of nanoparticle catalysts are especially efficient, because the small particles exhibit a high surface area at which the envisaged reaction takes place.

Many nanoparticle catalysts could be industrially relevant, for example for hydrogen production. However, such catalysts are not in industrial use due to their inefficient adhesion on electrode surfaces, especially when the electrodes are immersed into alkaline electrolytes and subjected to intensive gas evolution – the conditions encountered during hydrogen production.

A team involving Dr Corina Andronescu, Stefan Barwe and Prof Dr Wolfgang Schuhmann from the Center for Electrochemical Sciences found a solution to this problem. They coated an electrode with a catalyst together with a polymer precursor and heated it, leading to formation of a stable and conducting carbon matrix in which the catalyst particles are embedded.

“We expect that the presented method might also be applicable at an industrial scale, although this is yet to be validated. However, the necessary procedures are already well established,“ Schuhmann explains. In principle, it is the same technique as painting the door of a car. “A mixture of catalyst and polymer could be sprayed on an electrode surface, which is then transferred into an oven,“ the scientist illustrates. The team at the Center for Electrochemical Sciences already tested this approach at the laboratory scale.

The researchers from the cluster of excellence Resolv published their results in the international edition of the renowned journal “Angewandte Chemie”.