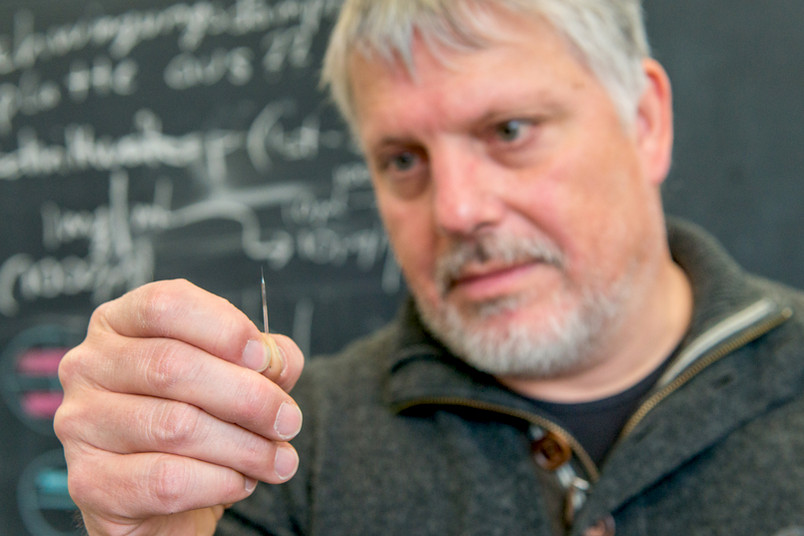 For the purpose of blood analyses and industrial tests, it is often necessary to measure the concentration of specific ions. The relevant devices are large and expensive. A new dry electrode could change all that.

Mini analysis systems for ion concentrations have posed a considerable challenge for developers to date. They had to find a compromise between size, costs and reproducible results.

A solution to this problem is delineated by the research team headed by Prof Dr Wolfgang Schuhmann from the Center of Electrochemical Sciences at the Ruhr-Universität Bochum in the journal “Angewandte Chemie International Edition”. The researchers designed an electrode that measures the concentration of specific positive ions in a stable manner and could be mass-produced at low costs. The electrode could be even smaller than 100 micrometres and be manufactured simply by printing a paste.

So-called ion-selective electrodes can, for example measure the concentration of positive ions such as sodium, potassium, calcium, magnesium and lithium ions. They have a membrane which is permeable only to the selected ion type that is to be analysed. Previously, the analysis system has contained an electrolyte solution, which likewise contains the ion type that has to be analysed.

The principle is as follows: the ions migrate through the membrane until their concentration is equal on both sides. Since the ions are positively charged, the electrical charge inside the analysis system will differ from that in the analysed liquid. A reference electrode submerged in the electrolyte solution measures the difference in electrical charge. Based on the measured result, the concentration of the analysed ions can be calculated.

If such a system were to be realised in a small format, it wouldn’t offer enough space for the electrolyte solution. However, Schuhmann’s team found a way to manufacture an electrode entirely without that liquid. This used to be a problem, especially in the case of electrodes that measure the concentration of positively charged ions.

“The solution was surprisingly simple,” says Schuhmann. Rather than using an electrolyte solution containing the ions that are to be analysed, the chemists deployed solid electrode material which is directly sensitive for the ion type that has to be analysed. In order to detect lithium ions, they made use of lithium-iron-phosphate. This substance has the capacity of storing lithium ions temporarily and to release them at a later point.

A 42-days test carried out in the course of the current study revealed that the system provides stable analysis results over a lengthy period of time. “We now have to search for other electrode materials with the capacity of storing other positively charged ions, such as sodium or potassium ions,” says Schuhmann. “Our progress so far has been encouraging.”

The German Research Foundation has financed the project under the umbrella of the Cluster of Excellence Resolv (EXC 1069).