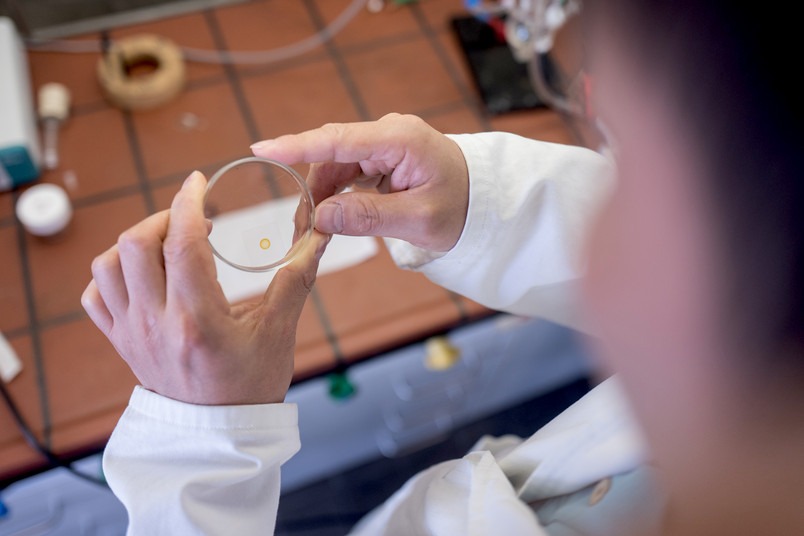 When droplets dry out, the substances in them collect in a ring.
© RUB, Kramer
Solvent chemistry

Researchers use a trick to prevent a ring from forming when droplets dry. This has far-reaching consequences.

If substances dissolved in water are sprayed onto a surface and allowed to dry, the deposits often form a ring. This is because the substances migrate to the edge of the water droplets during drying. Homogeneous surface coatings with functional materials have therefore been challenging until now. Using a trick, researchers led by Professor Nicolas Plumeré and Professor Thomas Happe from Ruhr-Universität Bochum (RUB) have now succeeded in producing uniform coatings. They provided the molecules dissolved in the water with a small sulphur group that forces the molecules to link to each other when they come into contact with oxygen. They thus form an even layer after drying. The researchers report on this in the renowned journal Chemical Science, published in advance online on 23rd August 2018.

Everyone knows the picture: a drop of spilled coffee dries on the table. What remains is a dark ring. The substances in the coffee move with the water flow inside the drop to its outer boundary between the table, the drop and the air, where the liquid evaporates. This so-called coffee-ring effect is responsible for the fact that substances dissolved in water are distributed unevenly on a surface. “As a result of this, it has so far not been possible to produce sensitive high-tech surface coatings with controlled film properties in this way,” says Nicolas Plumeré, head of the Molecular Nanostructures Research Group and member of the Cluster of Excellence Ruhr explores solvation, Resolv for short.

However, the coating of surfaces by spraying them with tiny droplets of dissolved materials is much gentler on the deposits than many other methods. In order to use this coating, Plumeré and his colleagues have developed a method that outsmarts the coffee-ring effect.

To do this, they provided the molecules dissolved in the water with a small sulphur group, which is packaged in such a way that it only becomes active in contact with oxygen. When a droplet of the solution dries, oxygen comes into play. The sulphur group then forces the molecules dissolved in the water to join together so that they form a network. “The drop is then no longer liquid, but a gel,” Plumeré explains. The molecules can no longer migrate to the edge of the water droplet and remain in place during drying. The result is an even layer without holes. The sulphur group does not influence the functionality of the subsequent coating.

This technique even makes it possible to coat vertical surfaces very uniformly with materials dissolved in water. Among other things, the researchers succeeded in coating a nitrate sensor with highly sensitive enzymes in a uniform and reproducible manner.

Method can be transferred to other applications

“Numerous other applications are conceivable,” says Plumeré. “For example, it would be possible to print solar collectors practically directly onto roofs.”

The work was funded within the framework of the Cluster of Excellence Ruhr explores solvation, Resolv for short (EXC 1069), and by the European Research Council.