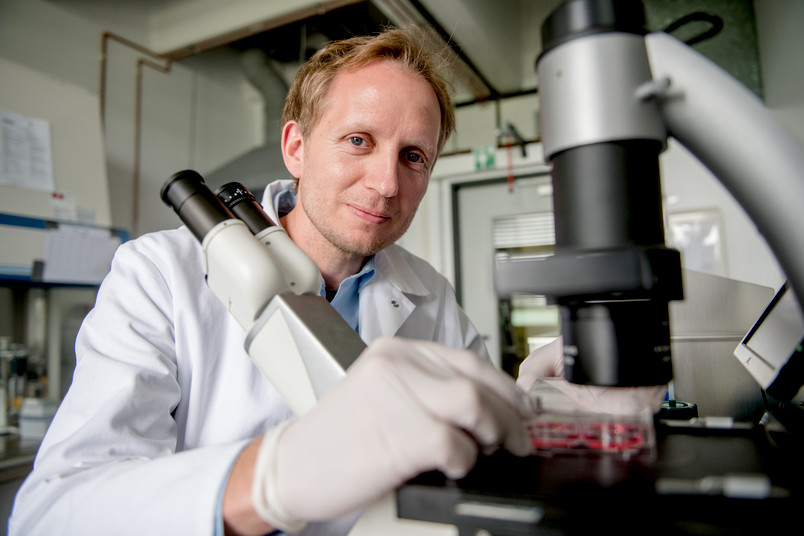 Pros and cons of genetic scissors

In combination with other methods, Crispr technology might one day render animal testing obsolete, according to the authors of a review article in “Trends in Cell Biology”.

Crispr technology has greatly facilitated gene editing. Associate Professor Thorsten Müller from Ruhr-Universität Bochum and Dr. Hassan Bukhari from Harvard Medical School discuss its pros and cons in a review article in the journal “Trends in Cell Biology” from 12 September 2019. They believe Crispr technology has future potential primarily if it can be rendered usable in the field of stem cell research.

In order to analyse the effects of genes or gene products, they used to be artificially over-activated. “Thus, they would occur up to 1,000 times more frequently than in nature,” says Thorsten Müller. “The cell was flooded with gene products, the proteins, which can falsify function analysis.” The Crispr method eliminates this difficulty. It can be used to implant blueprints of fluorescent proteins in cells and to position them behind a specific gene. “This has enabled us to monitor for the first time a protein’s function live under natural conditions – rather than after 1,000-fold overproduction,” explains the biochemist.

The Crispr method, too, has been optimised. Initially, researchers had to create so-called vectors in a time-consuming process, in order to label genes in the genome. Vectors are DNA segments whose sequence has to be to some extent identical with the DNA of the target cell, to ensure that the implanted gene finds the right spot. Today, they take advantage of the cells’ natural DNA repair function, which considerably simplifies the creation of vectors, and are consequently able to introduce fluorescent proteins quickly and easily.

In addition, fluorescent tagging makes it possible to observe where the labelled gene products are located in the cell live under the microscope. “This could be interesting in order to test the effects of drugs on certain gene products,” explains Müller. To this end, researchers would have to stimulate the cell with the active substance and track if and how the position of the gene product changes.

Different genes could be labelled with fluorescent biosensors in different colours and analysed simultaneously. The stronger the reading of a tagged gene, the more strongly does the cell fluoresce in the respective colour.

The authors believe a combination of this method with so-called organoids offers considerable potential. Organoids are mini organs derived from induced pluripotent stem cells that can be extracted from an adult organism. They can be used to, for example, build mini brains that are the equivalent to the human brain as far as function is concerned.

Should the application of Crispr technology in stem cells become more widespread, researchers would be able to analyse the effects of gene modification in complex tissues, rather than just in isolated cells. “We could study human genes live in tissues resembling those of humans and wouldn’t have to rely on animal models as much as we do now,” concludes Müller.

Following these considerations, Müller and Bukhari have compiled a number of key research questions in the review article, which have to be answered in order to consolidate Crispr technology and organoid technology.