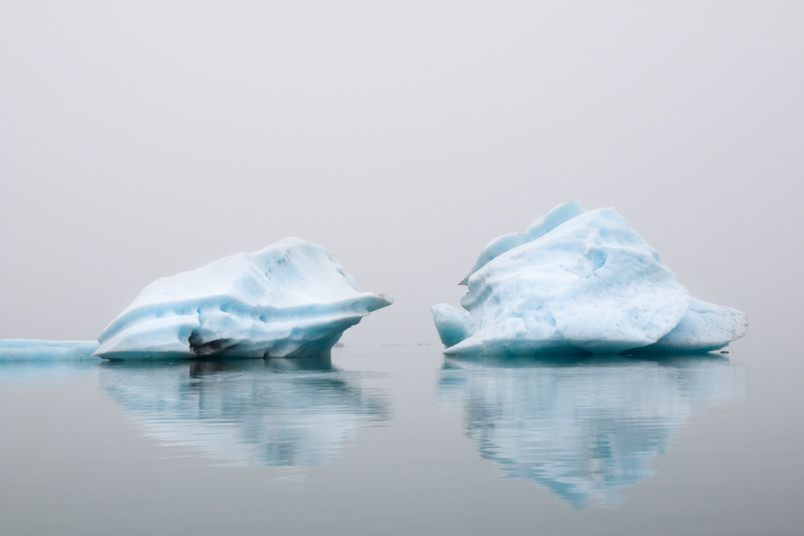 Water has some unusual properties: the density of frozen water, for instance, is lower then the density of liquid water – which is why icebergs do not sink below the water surface.
© Julia Weiler
Chemistry

Water may look like a simple liquid. However, it is anything but simple to analyse. The unique properties of water are only understandable, if scientists observe the interaction of the molecules.

An international team of scientists lead by Professor Martina Havenith from Ruhr-Universität Bochum (RUB) has been able to shed new light on the properties of water at the molecular level. In particular, they were able to describe accurately the interactions between three water molecules, which contribute significantly to the energy landscape of water. The research could pave the way to better understand and predict water behaviour at different conditions, even under extreme ones. The results have been published online in the journal “Angewandte Chemie” on 19 April 2020.

Despite water is at first glance looking like a simple liquid it has many unusual properties, one of them being that it is less dense when it is frozen than when it is liquid. In the simplest way liquids are described by the interaction of their direct partners, which are mostly sufficient for a good description, but not in the case of water: The interactions in water dimers account for 75 per cent of the energy that keeps water together. Martina Havenith, head of the Bochum-based Chair of Physical Chemistry II and spokesperson for the Ruhr Explores Solvation (Resolv) Cluster of Excellence, and her colleagues from Emory University in Atlanta, US, recently published an accurate description of the interactions related to the water dimer. In order to get access to the cooperative interactions, which make up 25 per cent of the total water interaction, the water trimer had to be investigated.

Now, the team lead by Martina Havenith in collaboration with colleagues from Emory University and of the University of Mississipi, US, has been able to describe for the first time in an accurate way the interaction energy among three water molecules. They tested modern theoretical descriptions against the result of the spectroscopic fingerprint of these intermolecular interactions.

Since more than 40 years, scientists have developed computational models and simulations to describe the energies involved in the water trimer. Experiments have been less successful, despite some pioneer insights in gas phase studies, and they rely on spectroscopy. The technique works by irradiating a water sample with radiation and recording how much light has been absorbed. The obtained pattern is related to the different type of excitations of intermolecular motions involving more than one water molecules. Unfortunately, to obtain these spectroscopic fingerprints for water dimers and trimers, one needs to irradiate in the terahertz frequency region. And laser sources that provide high-power have been lacking for that frequency region.

This technical gap has been filled only recently. In the current publication, the RUB scientists used the free electron lasers at Radboud University in Nijmegen in The Netherlands, which allows for high powers in the terahertz frequency region. The laser was applied through tiny droplets of superfluid helium, which is cooled down at extremely low temperatures, at minus 272,75 degrees Celsius. These droplets can collect water molecules one by one, allowing to isolate small aggregates of dimers and trimers. In this way the scientists were able to irradiate exactly the molecules they wanted to and to acquire the first comprehensive spectrum of the water trimer in the terahertz frequency region.

The work was funded by the German Research Foundation under Germany’s Excellence Strategy (EXC 2033 – 390677874, Cluster of Excellence Resolv). The theoretical work at Emory was supported by Nasa (Grant Number NNX16AF09G). The theoretical work at the University of Mississippi was carried out with support from the National Science Foundation (Grant number CHE-1664998) and the computational resources provided by the Mississippi Center for Supercomputing Research.