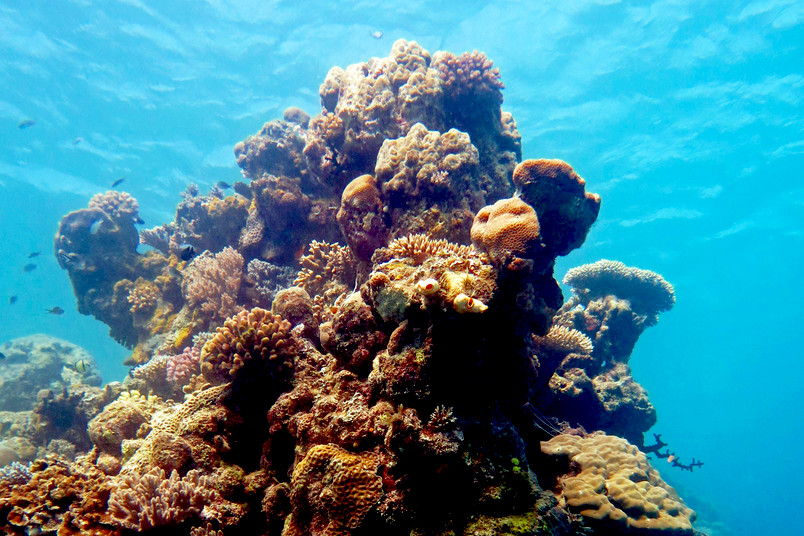 The tropical coral reefs stretch over many miles along the equator and provide a habitat for countless animals and plants.
© Fabian Gösser
Biodiversity

How corals react to climate change

Global warming and ocean acidification are endangering the coral reef habitat that is home to many species. However, stony corals are able to react to climate change and put up defences against it.

PhD student Fabian Gösser from the Department of Animal Ecology, Evolution and Biodiversity has been studying how corals react to changing environmental conditions and how their stress response could contribute to the survival of the reefs. The RUB biologist’s research focuses on the phenomenon of polyp bailout, i.e. the expulsion of small, bud-like individual corals called polyps. Under stress, the colony of polyps that form a stony coral dissolves. The individual polyps can then settle elsewhere and form new coral colonies. The phenomenon of polyp bailout has been little studied so far – and neither has the potential of this response for the survival of the reefs. An article has been featured in the RUB’s science magazine Rubin.

In order to understand the corals’ reactions to climate change in detail, the Bochum-based research team headed by Fabian Gösser, Dr. Maximilian Schweinsberg and Professor Ralph Tollrian is conducting experiments in research tanks by varying temperature, CO2 partial pressure and salinity. “We subject the corals to a stress test, simulating even more dramatic environmental conditions,” as Gösser outlines the approach. The biologists have already determined that different coral species react with different degrees of intensity to the stressors, such as an increase in salinity. “There are species that are more robust and species that are more sensitive,” as Gösser summarises the findings.

When polyps leave the sinking ship

The PhD student’s research focuses on the polyp bailout response that he observed in stony corals. “The individual polyps would detach from the coral colony in response to a temperature rise of four degrees Celsius above their tolerance and leave the sinking ship, so to speak,” explains Gösser. Even more astonishing in his opinion is that these polyps were able to start growing in a different location. The PhD student explains the significance of the reaction: “Even if only a small proportion survives the detachment process, it could have a huge impact on the preservation of the coral population, the genetic diversity, and the survival of the reefs.”

To understand the reaction in more detail, Gösser studies the bailout process at the molecular level. He analyses what happens to the polyps when they detach and which genes are switched on during bailout. For this purpose, the biologist first extracts DNA and RNA from tissue samples of stony corals that were taken at different times during the bailout process. He then sequences the complete messenger RNA, which transmits the information of the active genes as messengers, and compares the base sequence with previously decoded genomes. “We do see that genes are switched on during the bailout process that are responsible for immune responses in humans, for example,” as the biologist describes the initial results. These immune system responses during polyp bailout seem to indicate that microbial partners of the corals are involved in the response. Gösser’s analyses also suggest that the polyp bailout process is a general response of corals to acute stress, regardless of the type of stressor. The journal Coral Reefs features a report on the RUB biologist’s research findings.